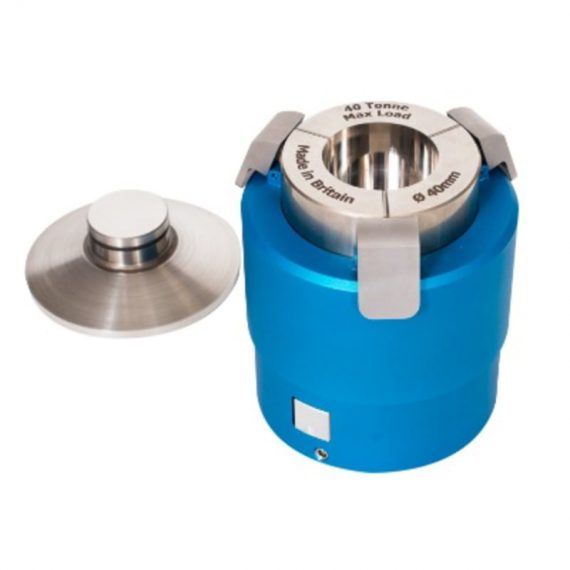 The Apex™ Quick Release Die revolutionises XRF sample pellet preparation by streamlining the extraction of sample pellets from the die. The whole process is faster and more simple than ever before.

The patented sample pellet’s ejection sleeve greatly enhances the release of the finished sample pellet, without the requirement to dissemble the die.

When used in with the Atlas™ Autotouch Automatic Hydraulic Laboratory Press, the two  steps above can be seamlessly programmed and take place in sequence.

The Apex™ greatly enhances pellet quality consistency by shortening the allowance for human error. Less hands-on interaction with the sample pellet is actually allowed and it is quick and easy to collect. The Apex™ also improves throughput by speeding up the whole process of pellet preparation. Less time is spent dissembling dies. More time can be spent on analysis.

Research & Industrial Instruments was founded in 1954 by Dr. Tadion to serve the market for sample handling devices. In 1955 he joined forces with Terry Horsley, Harry Merralls as well as Stan Ranson and the company continued growing quickly. It was in 1965 that Bernard Hawker also joined them in their enterprises.

Then, in 1968 Research & Industrial Instruments was acquired by Beckman Instruments, but in 1970, Beckman relocated to Scotland. In January 1971 Bernard Hawker and Stan Ranson started their own company, ‘Spectroscopic Accessories’, manufacturing graphite disks. It was in March 1971 when Terry Horsley and Harry Merralls were invited to join this new company, to strengthen the optics manufacturing element of the business and Analytical Accessories Ltd was formed. The range of products grew and they soon provided infrared accessories and optical components, as well as mounts, HPLC valves and far infrared instruments.

The name ‘SPECAC’ originated from a shipping agent deciding that “Spectroscopic Accessories Company” was too long.

By December 1984, Specac had built up a reliable worldwide network and became a member of the Defence and Instrumentation Division of Cambridge Electronics Industries (which later changed its name to Graseby plc).

1990 saw the development of a strategic plan to develop the company into a leading edge FTIR sample handling accessory manufacturer and in 1994 the company relocated into a purpose built building.

In 1997 Specac became part of Smiths Group, one of the UK’s largest companies.

Subscribe to our newsletter now and stay up-to-date with new products collections, the latest and exclusive offers.